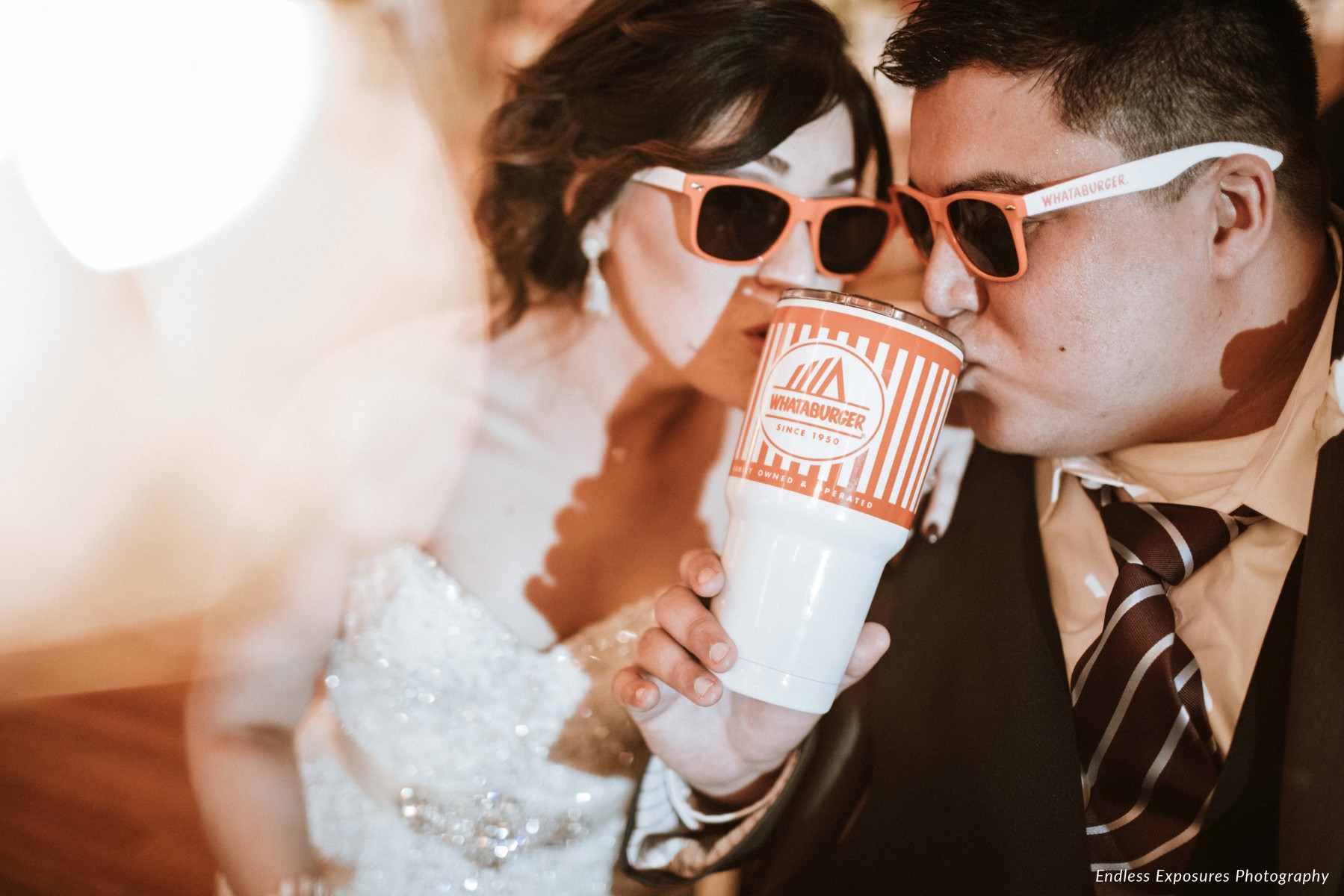 For these couples, marriage comes with a side of Whataburger love​.
Courtesy of Endless Exposures Photography

For these couples, marriage comes with a side of Whataburger love

Ever since she was a little girl, Hannah Goetsch had dreamed of a dazzling July 4th wedding. So when she and Mitchell, her high school sweetheart, were planning their ‘I dos,’ they decided to make it happen.

“I think it was pretty close, minus the broken leg and the caterer who quit 24 hours before,” Hannah says of how reality measured up to her fantasy nuptials.

A trampoline accident just five days before the ceremony put Mitchell on crutches.

Then, the caterer canceled the day before.

So, as couples do, the pair decided to make it work. They postponed their first dance, found someone to serve barbecue at the reception, and focused on the Independence Day fireworks – and their future.

“We had a donut cake,” Mitchell says. “The only thing I had the whole time was a donut and painkillers.”

Deciding where to grab a bite was a breeze for the recent University of North Texas graduates and residents of The Colony, for whom college all-nighters, bad days and celebrations automatically called for a trip to Whataburger.

So Hannah helped Mitchell out of the car, through the rain and into the Whataburger next to their hotel.

“It might have been an American wedding because of the day, but I was a Texas bride when I showed up to Whataburger in my wedding dress,” Hannah says. “Everybody was giggling at us, but I really just wanted a cheeseburger.

“A lot of things fell apart, but going to Whataburger was the perfect way to end the day,” Hannah adds. “It just made sense.”

Home is Where the Heart Is

Franchesca Foley was worried but hopeful the first time she brought her future husband home to Corpus Christi.

“I kept telling myself, ‘If he doesn’t like Whataburger, we are going to have some serious problems,’” she says.

She needn’t have worried. Ben Foley was hooked. Now the Columbus, Ohio, couple makes sure to get their fix as fast as they can when in striking distance.

“That’s the first thing we do as soon as we land in Texas,” Franchesca says.

When the time came to find a rehearsal dinner venue for their 2016 New Year’s Eve wedding, Foley asked Whataburger if they could pull it off. Whataburger by the Bay on North Shoreline Drive agreed to host the event for their 50 guests.

When Franchesca and Ben arrived, they were greeted with a congratulatory sign and found the entire second floor and patio had been reserved for their party. Guests were able to order at the register before heading upstairs, where Family Members had decorated tables with a combination of the couple’s wedding theme and Whataburger items.

And “WhatAWedding” was—literally—the orange-and-white icing on the cake made by the restaurant as a surprise for he couple.

“It was so much more than we could have ever hoped for, how much detail and heart they put into it,” Francesca says.

Jessica Block and her husband, Adrian Valdez, joke about Whataburger’s staple status in their household, but they also credit burgers for helping Jessica through an illness.

“The last year when I got sick, Whataburger was the only thing I was able to eat,” says Jessica of the time she was hospitalized with an autoimmune disease. “I keep joking that Whataburger and Coke saved my life.”

When the Austin couple was planning their wedding, Adrian lobbied for a Whataburger menu. “We can always find something we both like,” Adrian says. “It’s an automatic go, no matter what we’re both feeling.”

The couple settled on a traditional caterer, but they knew they had to incorporate Whataburger into their special day. And they did it in style. Jessica’s bridesmaids sported orange Whataburger sunglasses and Adrian’s kept a firm grip on his Whataburger beverage tumbler. Guests scooped up can holders and other Whataburger-branded wedding favors faster than a Honey Butter Chicken Biscuit at 10:59 a.m.

“We didn’t think they would be as obsessed as us,” says Jessica.

For these couples, marriage came with a @Whataburger wedding.

Four Ways to Make Whataburger Part of Your Happily Ever After