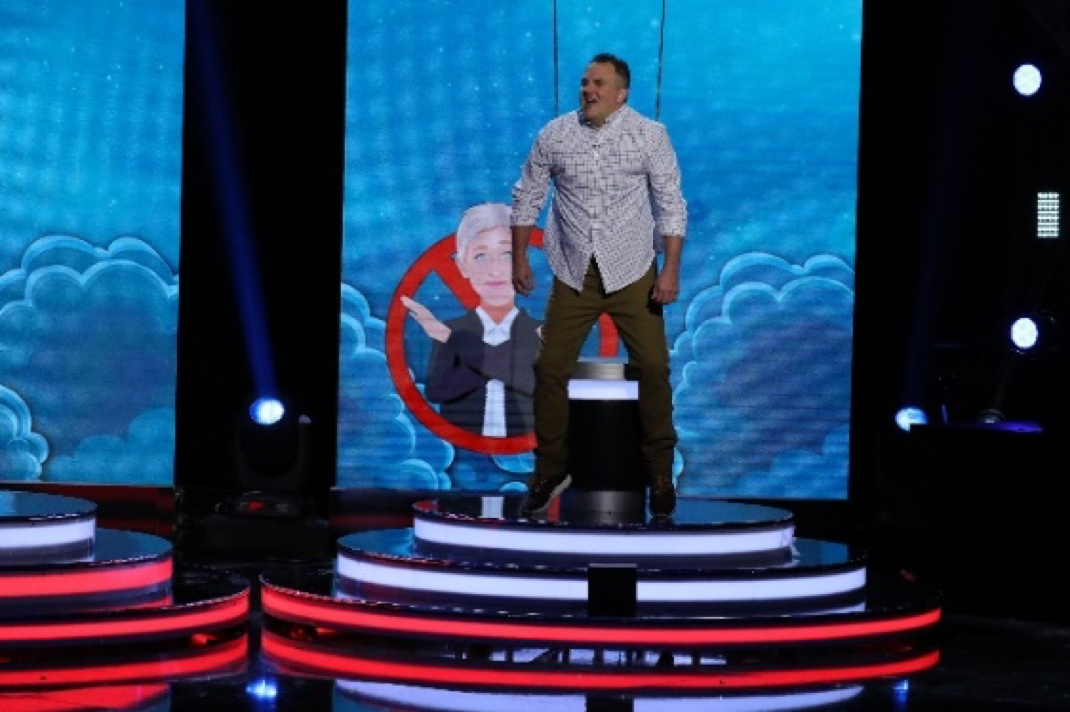 If Whataburger's not the right answer, the question is wrong

His answer was so right. Yet it wasn’t. But that’s OK because social media’s on his side.

“Whataburger” was Steven Carter’s response on a recent episode of “Ellen’s Game of Games” when host Ellen DeGeneres asked contestants to name the top 20 fast-food restaurants in the U.S.

Social media gave a collective – and, of course, snarky – gasp when DeGeneres said no to Whataburger. It’s all cool, though.

Ultimately, Carter won, taking with him $2,500 and his love for Whataburger. Since the show aired March 19, he’s felt lots of Whataburger love.

“You would not believe how many people have messaged me saying I was robbed on that question,” he says.

It was, after all, the natural answer for the Birmingham, Alabama, contestant. “I’d just eaten at Whataburger! One had just popped up near my house here in Birmingham. My friends and I were going there a whole bunch before the show taped last June.”

We get it. Carter likely was thinking how comforting his favorite Whataburger nosh – a grilled cheese with pickles and a side of onion rings – would be at such a stressful moment.

Take a look at the reaction: 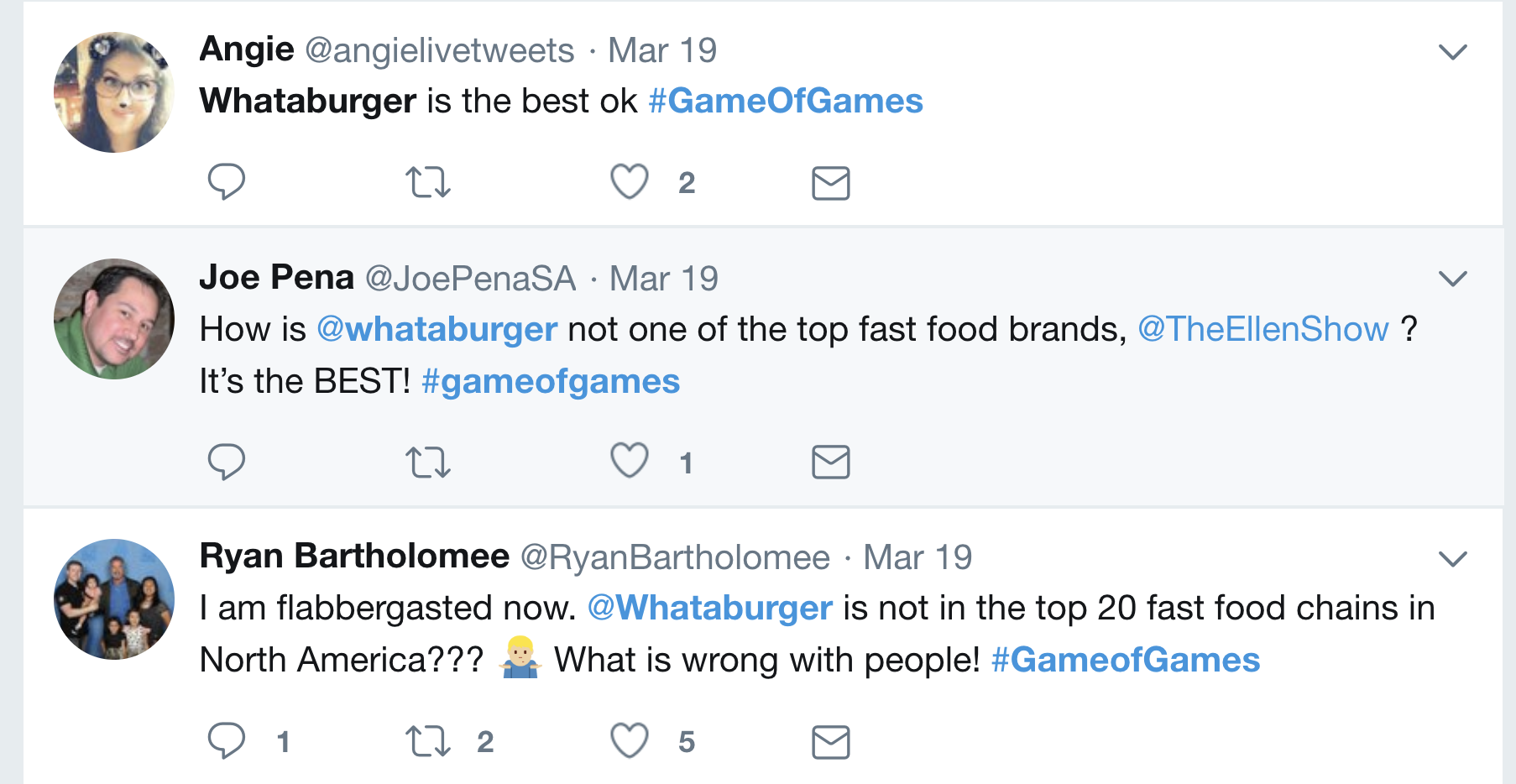 Don’t be throwing things at the TV, Whataburger fam! 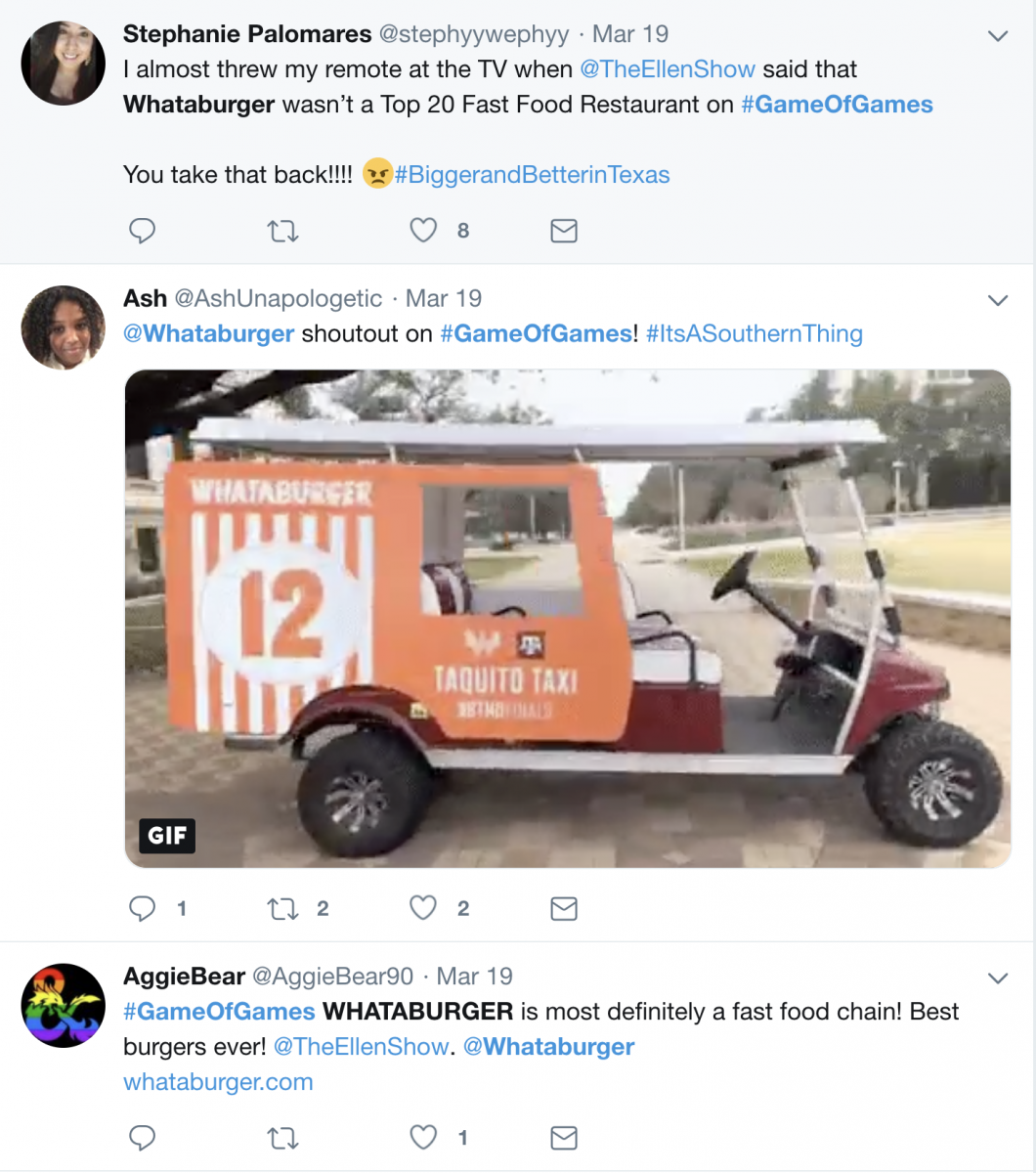 It wasn’t only the Twitterverse that went nuts. “All my friends have called and texted about Whataburger,” Carter says. “I could have fallen down on my face or whatever, and nobody would have said anything. But, Whataburger! They’re all saying, ‘You were robbed!’ ”

Carter got yanked up about a foot for his Whataburger answer, his second strike in the Don’t Leave Me Hanging challenge. “Those harnesses definitely aren’t the most comfortable things,” he says, laughing. (Photo courtesy of NBC Universal)

Carter told Ellen he would travel and make the most of his prize money. And he’s kept his word, making jaunts to Florida and New Orleans. And maybe a couple of trips to Whataburger, too. (Photo courtesy of NBC Universal)

We agree: Steven Carter was robbed! Learn more about all the places you can eat Whataburger on our app, which includes a convenient location finder, online ordering and a chance to earn free food! Learn more here!

If Whataburger's not the right answer, the question is wrong

Going to the Dogs

No doubt about it, dogs are the MVPs of the …
Read more

Whataburger Lotería
¡Ordena a cualquier hora y desde cualquier lugar!
Whataburger Gets in the Game as Official Burger of the Dallas Cowboys
Going to the Dogs
Goodness on Wheels
Whataburger Celebrates 70th Anniversary
Comments (0)
Thank you for your message. It will be posted after approval.