June 20, 2018 -- Whataburger is proud to open its doors to the second Tuscaloosa restaurant, located near the University of Alabama campus at 13th Street and McFarland Boulevard, open 24 hours a day, seven days a week.

Customers also have the option to make all of Whataburger’s offerings their own by customizing them to their liking – substituting mustard or mayo, removing any toppings, adding their favorite sauces, grilled veggies, cheese, or any other unique pairings, just like they like it.

Whataburger is a proud sponsor of University of Alabama athletics including football, men’s and women’s basketball, gymnastics, softball and baseball. To show Whataburger’s support for the university, there is a Crimson Tide logo on the exterior of the restaurant and a mural showcasing iconic photos of the University of Alabama on display in the dining room.

“Whataburger received such positive response from the community after opening our first restaurant,” said Whataburger Director of Operations John Attra. “By adding another location close to campus, we look forward to continuing our involvement with the university and satisfying all-day cravings and late-night appetites.”

Whataburger held a #ServeMeFirst contest on their social media channels, asking fans why they deserved to be the first in line to eat at Whataburger when it opens. That honor went to Kanesha Springer, who was invited to meet the team and is set to be the first to enjoy their favorite Whataburger meal at Tuscaloosa’s newest restaurant.

Whataburger is currently looking for hard working, self-starting restaurant managers to start a career that can last a lifetime. The company places a strong emphasis on developing its employees, referred to as Family Members – including providing opportunities to participate in leadership and career development training at Whataburger University located in San Antonio, Texas. Interested candidates can find more information about the open positions and benefits on the company’s website.

Whataburger encourages local residents to follow its social media channels for updates on Facebook, Twitter, Instagram and Snapchat, @WhataburgerLife. Be sure to also stop by Whataburger’s digital newsroom, What’s Cookin’, to see the latest Whataburger news. 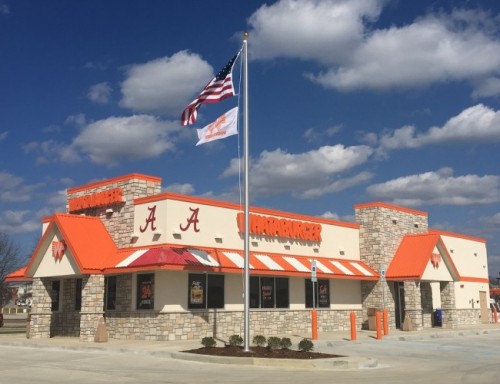