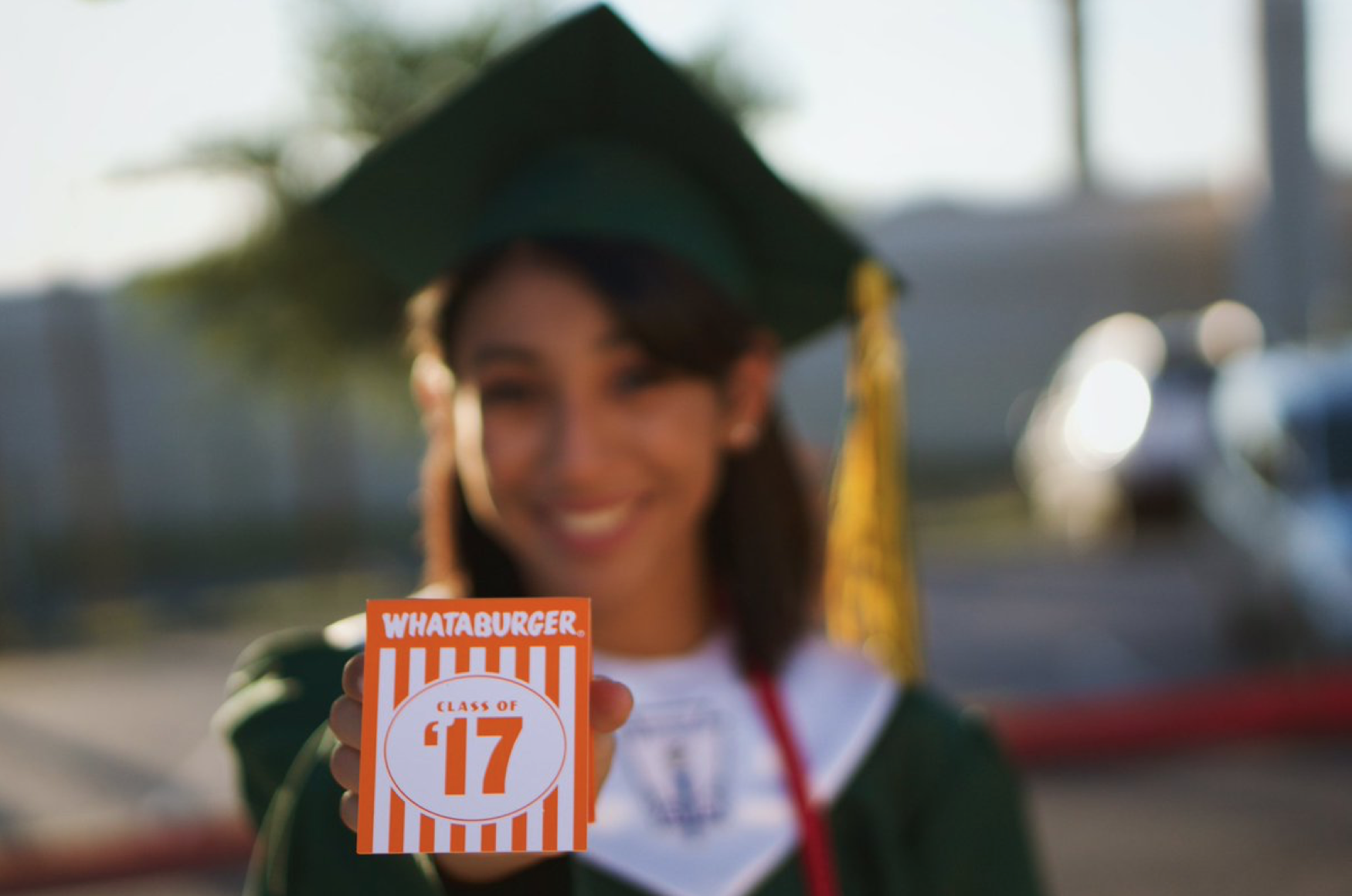 See How These Seniors Capped Off Senior Year

Whether it’s hanging out Friday night after the game, grabbing dinner before prom, or cramming for finals in the wee hours of the morning, Whataburger is the backdrop for a lot of high school memories. And some students take that dedication to a whole new level.

Tyler Skelton got his first taste of Whataburger at age 16 after getting his driver’s license. His hometown of Brock – population 80 – doesn’t have a Whataburger. So he and his high school buddies took their newly earned freedom on the road and headed 13 miles up the interstate to Weatherford, where he ate his first Patty Melt. 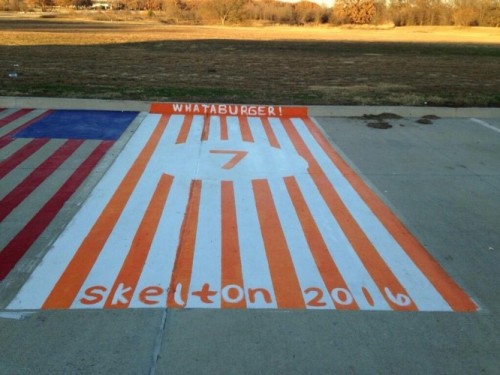 “It was fantastic,” Skelton says. “I thought, ‘Why don’t I come here more often?’”

Senior year, Skelton painstakingly painted his parking spot at Brock High School to resemble a Whataburger table tent with the number 16, his class year. “I tried to get my senior pictures taken at Whataburger, but my parents weren’t going for it,” Skelton says.

It’s no coincidence Skelton now goes to school at Baylor University in Waco, a town with four Whataburger restaurants he can visit 24/7.

“Texas forever is what I think of whenever I think of Whataburger,” Skelton says.

“I always correlate Texas and Whataburger. I think it’s one of the best things in our state, and I just couldn't imagine Texas without it." 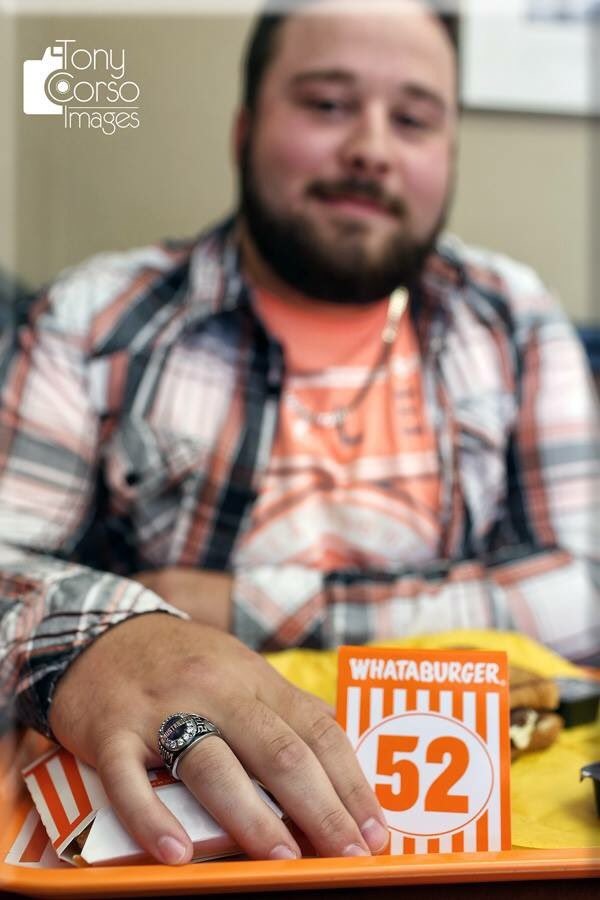 Go ahead, take your senior portraits leaning against a tree or next to a giant number ‘17.

Denim McIntirewanted something that captured his true self. So, he was photographed at Whataburger, with his All Time Favorite – a Patty Melt – in front of him.

“I thought it would be cool to take pictures at places I spend a lot of time,” he says, “and Whataburger is definitely my favorite place to eat.”

McIntire says the Whataburger-themed shoot was a first for the photographer, but he had no problem making the restaurant his “studio.”

Even McIntire’s parents were on board: “They thought it was an awesome idea.”

Two years in a row Bethany Collins and her date have had their pre-prom meal at Whataburger. 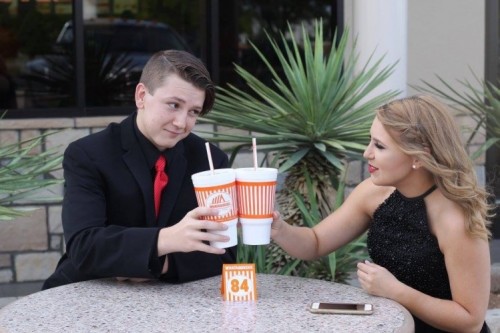 Collins’ attachment to Whataburger began when she lived in a small town, and grocery trips involved stopping first at Whataburger. “It became kind of like a tradition, and I always craved Whataburger,” she remembers.

Now she lives around the corner from one.

“My love for Whataburger will never die,” Collins says. In fact, she’s got plans for the future that involve a lot more time underneath the restaurant’s orange-and-white stripes. “Me and my husband will have our Whataburger dates at least once a week,” she says. 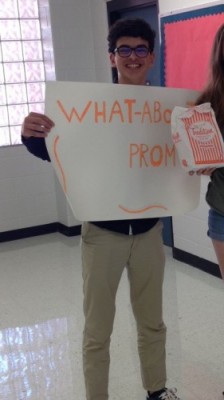 The Promposal: Yosri Jaziri, 17, International School of the Americas in San Antonio

Thanks to a family connection, Jaziri’s craving for Whataburger started 6,000 miles away in Tunisia. His older brother came to San Antonio as an exchange student, and made a point of telling his kid brother how good Whataburger was.

“He said, ‘Yosri, you would not imagine how good it is,’” Jaziri says.

So when the younger Jaziri was accepted into the same exchange program, he says his first thought was Whataburger. “The dream is finally coming true,” he recalls thinking.

Now that his older brother is back home, and Jaziri is in Whataburger country, he sends pictures of his Whataburger orders home to his jealous brother. He even incorporated Whataburger into his promposal, asking his intended, “What A Bout Prom?” then presenting her with a Bacon & Cheese Whataburger to seal the deal.

“She loved it,” he says. “You don’t want to choose wrong with her Whataburger meal.” 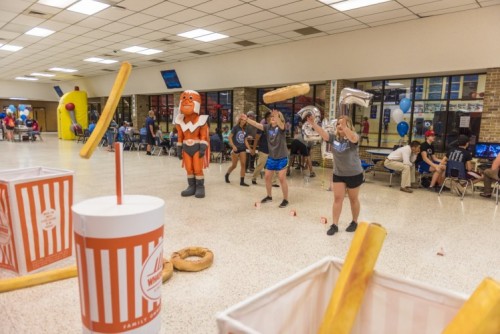 “Whataburger’s always been kind of a big deal at Greenwood,” Urias says.

The bedroom community lies 10 miles east of the nearest Whataburger on the edge of Midland. Every Friday after football, much of the community migrates west for a few hours to get their French fry fix and keep the fun going.

“It’s something that’s been a part of us for all four years of high school,” she says. “We put that into our theme for homecoming week.”

The students chose to decorate the halls of their school in giant Whataburger fry boxes and table tents. They even had a Whataburger-themed Project Graduation. “I always correlate Texas and Whataburger,” Urias says. “ I think it’s one of the best things in our state, and I just couldn't imagine Texas without it."

These high school students capped off senior year in style with @Whataburger.