They were just stopping in for breakfast. And then a choir showed up.

Fans who stopped in for their favorite Whataburger meal had no idea they’d hear voices from the other side of the world.

For Timothy Kawuma, joining the African Children’s Choir at the age of 8 was life-changing. 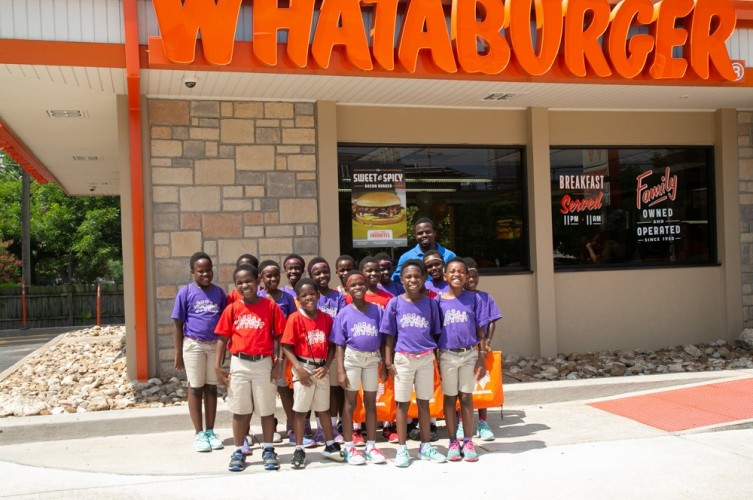 One of four children raised by a single mother in Uganda, his life was uncertain. “My mother could not provide

for us the basic needs: Food, clean water, shelter … we were really struggling,” he says. But being selected for the choir meant Timothy would be able to tour the world, receive an education through university, and – best of all – live safely and comfortably.

“I cannot tell you how long I danced when I found out that I made it!” he says. “My mom, she just fell down on her knees, and she was in tears. This meant I was a beacon of hope for my family.”

Now an adult, Timothy is still a member of the African Children’s Choir – working as the head of the children’s school as the group travels.

This weekend, the choir will participate in the Bernstein100Austin presentation of Leonard Bernstein’s masterpiece “MASS: A Theatre Piece for Singers, Players, and Dancers,” happening June 29 and 30 at Austin’s Long Center for the Performing Arts.

Staging Bernstein’s “MASS” is a lifelong dream of Maestro Peter Bay, and will feature a cast and crew of more than 300 people and an unprecedented collaboration of performing arts organizations, including the African Children’s Choir. 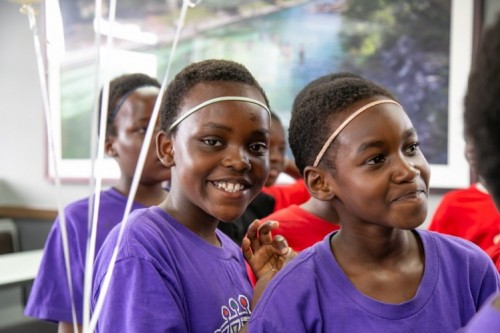 Since 1984, The African Children’s Choir has provided opportunity to some of the continent’s most vulnerable children. The organization brings together children between 7 and 10 years old, many of whom have lost one or both parents.

The choir supplies the children with a stable home and education and prepares them for future opportunities. To date, more than 52,000 children have been educated through the organization.

Alumni of the choir now work in a variety of professions, from education to law and health care – and many return to their communities to make a difference.

“Our vision is helping Africa’s vulnerable today so that they can help Africa tomorrow,” Timothy says. “We love Africa. We believe in Africa. It’s always a joy when you have been empowered to go back and reach out to thousands more that need the help.”

The choir tours extensively, having performed thousands of concerts throughout the world. This summer, they’ll travel the American south, including several concerts in Texas, Oklahoma, Arizona and New Mexico.

Debuted in 1971, Bernstein’s “MASS” is a unique mix of musical styles, incorporating classical and contemporary sounds, as well as theatrical flair.

Commissioned by Jackie Kennedy, the work premiered as part of the opening of the Kennedy Center for the Performing Arts in Washington, D.C. 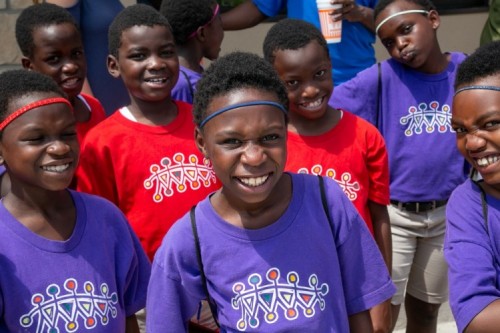 This weekend’s production, featuring more than 300 performers, is the largest known, full theatrical staging of the piece, according to the Long Center. “They’ve put together such a special group of people from all over the world, literally,” Julia says.

Staging the MASS has been a lifelong dream of Maestro Peter Bay, who has been the music director and conductor

of the Austin Symphony Orchestra since 1998. As a child, Bay watched a televised performance of Bernstein conducting and also attended the 1971 premiere of MASS at the Kennedy Center.

The show is the culmination in Austin of B100A – Bernstein100Austin – a celebration of the 100th anniversary of the legendary composer and conductor Leonard Bernstein.

Arts organizations across the city, including the Austin Symphony and the Bob Bullock Texas State History Museum, are bringing attention to Bernstein’s legacy through outreach workshops, exhibits, and concerts.

“Mr. Bernstein has a wide variety of music that he’s done … some is simple, some is more complex, but it appeals to different people,” Timothy says. “There are great lessons to learn in some of the words in his music. There is so much faith, there is courage … our struggles and our victories. It’s a story of humanity.”

They were just stopping in for breakfast. And then a choir showed up.