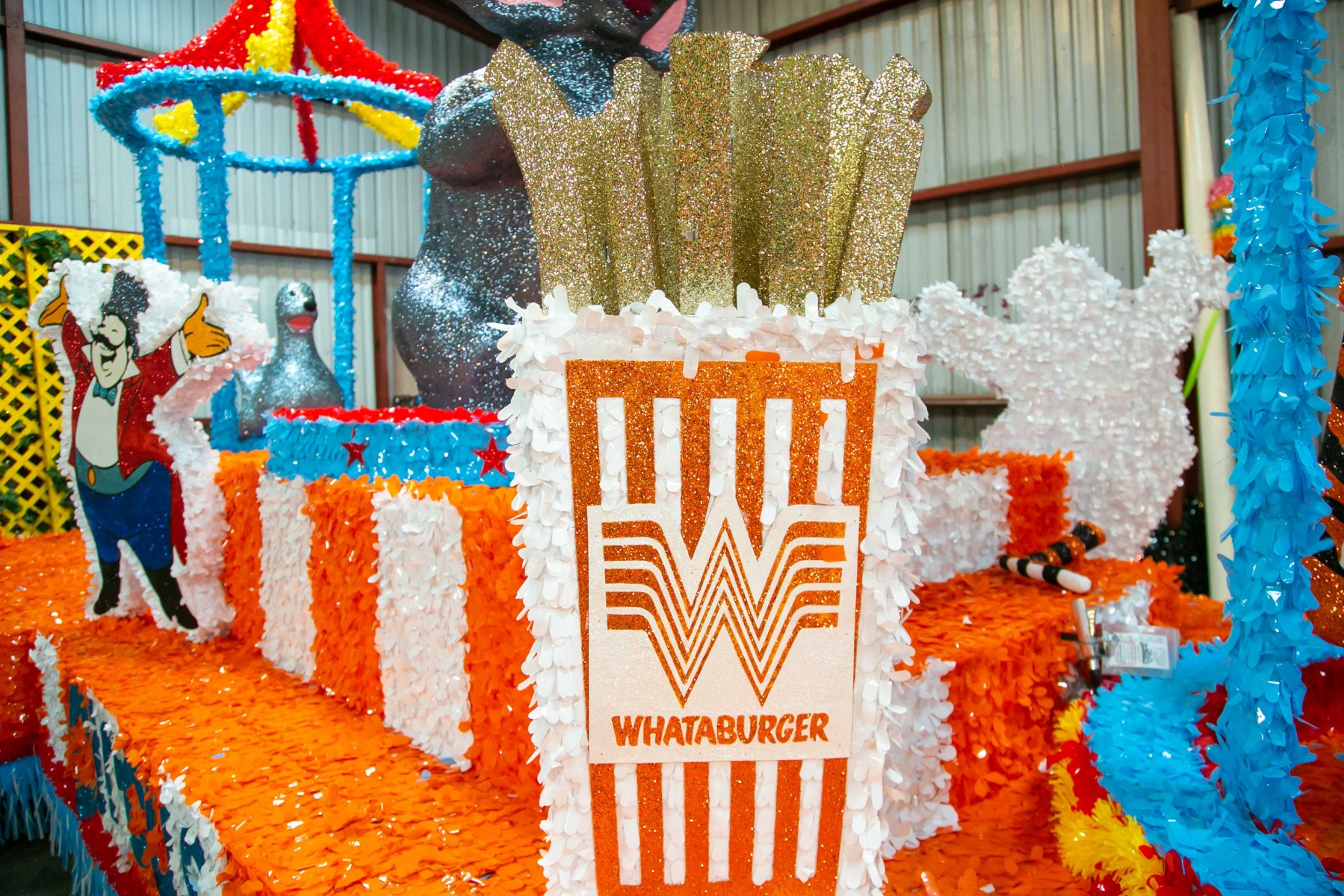 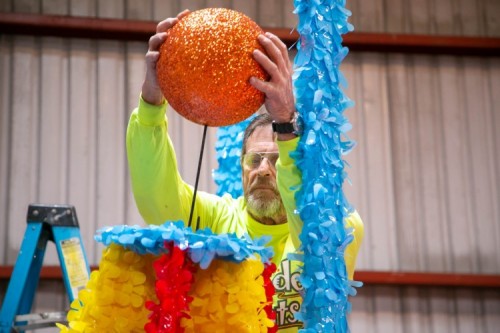 Clyde Watts has been making over-the-top, one-of-a-kind parade floats for 50 years, first as part of his family’s business and then running his own company, Lone Star Parade Floats.

This spring, he’s been at work on a Whataburger float, which will debut at the 2018 Battle of Flowers Parade during Fiesta San Antonio. Crafted around a circus theme, it features Whataburger’s signature orange-and-white stripes, circus animals, and – of course – lots and lots of glitter.

It’s one of many floats that Watts and his team at Lone Star created for the April 23  event. The Battle of Flowers parade honors both the fallen heroes of the Battle of the Alamo and celebrates the Texan triumph at the Battle of San Jacinto, an 1836 battle which is hailed as perhaps the most significant victory of the Texas Revolution.

The parade, which lasts almost four hours, is one of the biggest celebrations of the two-week-long citywide party that is Fiesta San Antonio.

“We’re doing 31 floats for Battle of Flowers,” Watts says. “We’ve been working on them since August of last year. It’s a nine- or 10-month ordeal getting ready for this one parade.”

Here’s a glimpse into the mind of the man behind all that (fabulous! festive! glittery!) magic.

What makes working on floats for the Battle of Flowers fun?

There are two parades where we can be really creative and enjoy designing and construction, and those are Battle of Flowers and the Parade of Lights in Ft. Worth. It’s a lot of fun coming up with ideas. My company does a lot of foam carvings that are all glittered, not just painted. That’s quite unique and real spectacular.

What makes this job challenging?

Trying to get people to realize there are some limitations, no matter how much money they can throw at it. Some want the foam props to move, which means it would need to be carved, disassembled to insert mechanics, reassembled and that one piece would end up costing $35,000 to $40,000.

How many pounds of glitter do you use?

No less than a couple thousand pounds a year. It’s not only on the carvings, but the logo that goes on the float that identifies the sponsor, even that lettering is cut out, hand painted and hand glittered. It’s stunning. It really looks great. 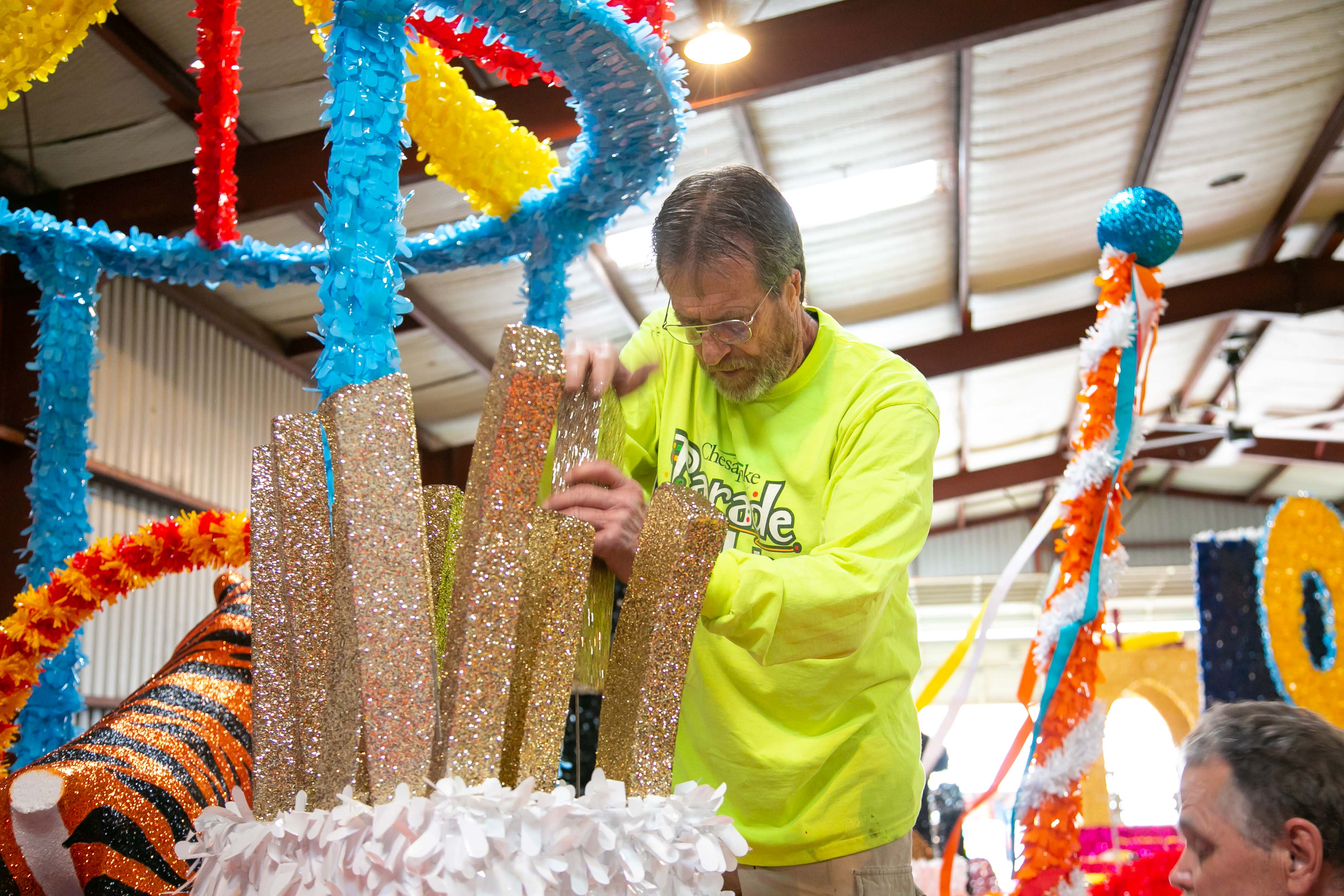 Wow, you must have glitter everywhere.

It’s on my dogs. The grout in the shower sparkles. The steering wheel, it doesn’t come out of that. I go get a haircut and they look at me funny. I’m 67 years old. People don’t associate someone my age with having glitter on them.

Viva Fiesta! Pick up your 2019 Whataburger Fiesta Medal in our Whatastore: https://shop.whataburger.com/gifts/2019-fiesta-medal/

And don't forget to get extras to trade!

At Whataburger, we like to say we have the best guests in the business.They brighten our day with their greetings. Bring us smiles with their stories. And make the Whataburger Family complete with …
Read more

Psst. Put down your fries for a second -- we have to break something to you. We know it feels like March 325th... but it's October, and Halloween is upon us. There's no point rushing …
Read more

As she watches season 14 of “America’s Got Talent” this summer, Whataburger Family Member Erica Dierdorff is tuning in to cheer on some of her newest friends. It's people she met while …
Read more

Latest News (opens in a new window)
Previous Next