We’re firmly rooted in our history, but our mission drives us every day 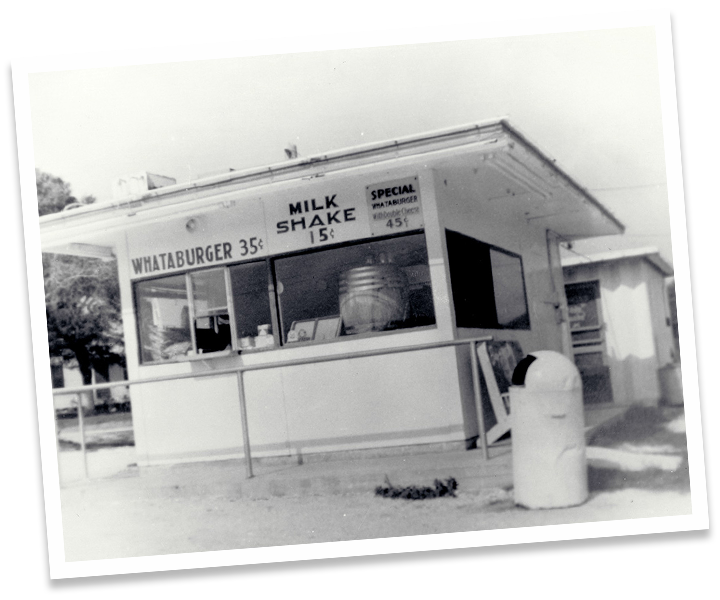 On August 8, 1950, an adventurous and determined entrepreneur named Harmon Dobson opened up the world’s first Whataburger on Ayers Street in Corpus Christi, Texas. He had a simple goal: to serve a burger so big it took two hands to hold and so good that with one bite customers would say, “What a burger!” He succeeded on both counts and turned that one little burger stand into a legend loved throughout Texas and the South.

Today, each and every Whataburger is made to order, right when it’s ordered. And they’re still made with 100 percent pure beef and served on a big toasted five-inch bun with all “the extras” to suit your taste. Grilled jalapeños, extra bacon, three slices of cheese, no tomatoes, extra pickles? No problem. Your Whataburger will be made just like you like it, 24 hours a day, seven days a week.

Whataburger’s following has grown exponentially throughout its history, thanks to a number of features, including its famous burgers and growing list of menu items; its iconic orange-and-white-striped A-Frame restaurants established in the early 1960s; its Fancy Ketchup that even has its own Facebook fan page; and its on-screen presence in everything from “King of the Hill” to “Friday Night Lights.”

Now in our seventh decade, with more than 840 Whataburger restaurants across 10 states stretching from Arizona to Florida, Whataburger continues to bring road-trippers and hometown folks together under our orange-and-white roofs for fresh, made-to-order burgers and friendly service.

No matter how big we grow -- and we are growing! -- Whataburger will always be a place where goodness lives.​

Your career at Whataburger can be what you make of it.
We will give you the opportunities, tools and resources you need to reach your full potential.

What are Whataburger's Core Values?

What are Whataburger's Guiding Principles?